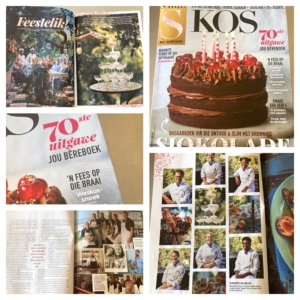 Currently, there is an exceptionally gorgeous SARIE KOS/FOOD edition on the shelves. It is the magazine’s 70th edition, a celebratory keepsake, and the ICA features in it!

It is no secret that Herman Lensing, editor of SARIE KOS/FOOD, is a proud ICA graduate. Recipient of the ICA Merit Award for Best Practical Performance in his graduation year, the ICA placed Herman under the mentorship of Barbara Joubert (former editor at SARIE) for his specialization field experiential training in his 3rd-year of study. Herman continued building on the foundation of his culinary skills and developed into a promising young chef and food media candidate. He was appointed immediately after graduation as the youngest ever food editor in the history of SARIE magazine.

Like so many other ICA graduates, Herman continues to give back to chef students who are yet to enter the professional arena. He is a preferred industry training partner – students specializing in Media Communication are mostly placed with ex-ICA students who are now top food media journalists, stylists, and writers such as:

This is not an exhaustive list but all of these leaders on the food media front studied at the ICA and are now helping the school to shape culinary media professionals of the highest standard.

In the same issue of SARIE KOS/FOOD is also an article about yet another ICA graduate’s selfless dedication to bettering and uplifting his kitchen staff and the local community to higher standards. Kobus van der Merwe, multi-award-winning chef-owner of the famous Wolfgat restaurant in Paternoster, has guided Rochelle Karolus from administrative assistant to sous chef at this world-renowned strandveld eatery.

This is another example of the culture amongst some of the industry’s best to uplift, empower and give back. The ICA’s strict placement policy ensures that students are given the opportunity to gain hands-on experience in the kitchens and offices of ICA alumni – qualified chefs and industry professionals who can carry the same positive outlook regarding kitchen management forward, who value discipline as much as creativity and aims to inspire, mentor and teach chefs of the highest caliber for the future.

The ICA believes that cheffing is a noble profession, deserving of esteem and admiration. Of course, fast-paced kitchens are notoriously stressful environments, and yes, sometimes tempers flare and emotions run wild. As the current 2nd-year students returned to campus from their respective industry training establishments this week, some of them report that things are done far differently “out there” than what they experience in practical and theory classes at the ICA. This may be so, but in answer to this comment, ICA Senior Chef Lecturer, Pierre van Zyl, replied with the following:

“Each establishment has its very own, unique culture. At the ICA we teach you what is most important. We cultivate your respect, your dignity, and your exceptional skills as chefs. We are training the next generation and it is up to you to be the change and take the baton forward.”

Cultivating the discipline necessary to reach the highest outcomes in this very demanding and competitive industry, is what leads students into becoming qualified professionals who will forever value the importance of excellence, in all aspects of the culinary arts.

Applications for 2023 are now open.

APPLY NOW
INVEST IN YOUR FUTURE