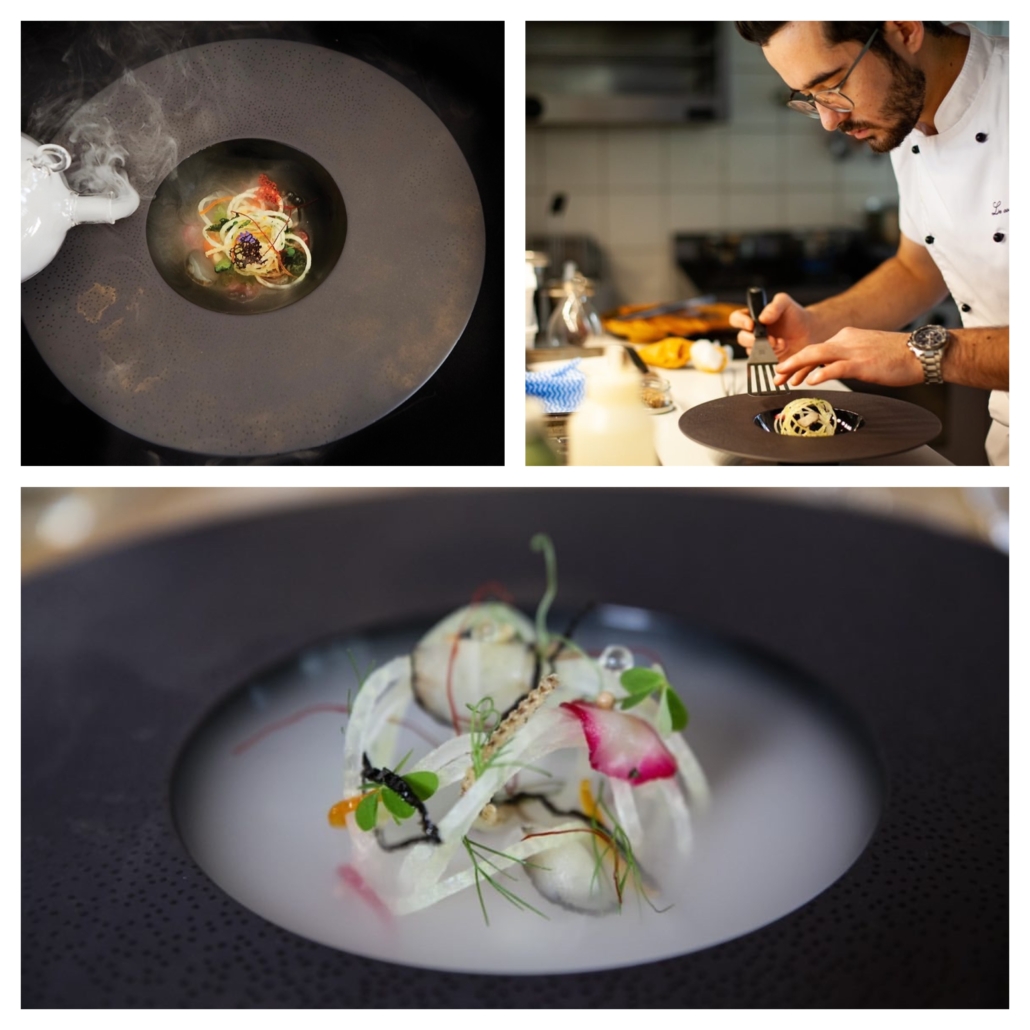 The Kob ceviche is done in 2 ways and native to South Africa. The ceviche is rubbed with chokka ink to create a black ring around the fish when sliced. The gold dust speaks to the oil companies making a profit off the destruction of our ocean. The tuille looks like coral and resembles the effect pollution has on the ocean. The ghost net made from spiralized kohlrabi visually “traps” other elements on the dish. Pouring dry ice into hot seawater creates an eerie mist or ghost that covers the majority of the dish when poured over.

Your plate, my canvas

Food and the culinary arts can be a powerful way to communicate. It speaks to its audience on so many levels, that the message portrayed must always be carefully considered. ICA students are trained and strongly encouraged to develop their own unique culinary voice and identity to be able to express themselves in a distinct and individual manner on a plate.

Individuality is consistently cultivated alongside skillful technical capability and theoretical competence within the ICA kitchens and classrooms. The vast uniqueness throughout history to modern times is accentuated when our students have to present a comprehensive, detailed study on specified culinary mentors, highlighting their originality and the distinct marks they left on the world of culinary arts.

Professional chefs are positioned center stage between science and art. The ability to bring these two contrasting disciplines together is what distinguishes a chef from a cook. Yes, the common belief remains that “if you can read, you can cook”, but it’s the in-depth understanding of the science behind cooking and the methods used to manipulate produce to a specific, desired outcome, that sets well-trained chefs apart from their peers.

Social responsibility and sustainability in all walks of life are at the forefront of current global affairs, also impacting the cheffing and restaurant industry in a major way.

ICA graduate, Callan Austin, recently won the 2021 S. Pellegrino Young Chef Academy Social Responsibility Award in Milan, Italy. His entry for the competition was titled “The Ghost Net”, emphasizing the importance of creating dishes that are ethical and sustainable.

Callan’s creation, The Ghost Net, is meant to help raise awareness of pollutants we don’t really know about – a ghost net is an abandoned trawler’s net that continuously entangles and traps all sorts of sea life.

“I wanted to highlight that story, using proudly South African ingredients. Getting the opportunity to present my dish on such a renowned platform the S. Pellegrino Young Chef Academy was really amazing and it meant that I could share my message with the world. Food is really an art form that feeds both the body and the soul.”

THE ABOVE PROVIDES ESSENTIAL PROOF THAT CHEFS HAVE A STRONG VOICE AND CAN MAKE A BIG DIFFERENCE THROUGH THEIR CHOSEN CAREER PATHS IN THE CULINARY ARTS.

Don’t miss the detailed description of The Ghost Net by Callan below. Everyone should read this!

“Most people that have asked me about my dish The Ghost Net ask what it is all about and what a Ghost Net actually is. In response, it is one of many overlooked and misunderstood unsustainable fishing practices that cause destruction to our oceans.

A Ghost Net refers to the phenomenon of an old trawlers net that is too damaged for commercial use anymore so it is cut loose from the boat and left to drift around with the oceans currents continuing to entangle, trap and suffocate sea life, never to biodegrade because of the materials used to make up the net. It is truly horrific.

My dish is full of meaning, with nearly every element making a link to sustainability, local and foraged ingredients, and the ocean itself.

The kob ceviche done in two ways is farmed and native to South Africa. The one style of ceviche is rubbed with chokka ink to create a black ring around the fish when sliced and is a link to oil pollution and how it is literally smothering our fish and ocean. A thin layer of gold dust coats the chokka ink kob and speaks about how these massive oil companies are making a profit off the destruction of our oceans.

Octopus fishing has recently stirred up some controversy in the Cape as the two methods used to catch the species is either the pot method (which has been infamous for entangling whales in the thick rope that leads to buoys) and the second method is as bycatch from (you guessed it) trawling nets. On the SASSI list, octopus is listed as green-orange which – without further research – chefs could be led to believe that it is kind of sustainable, when in fact there are underlying issues with cultivating these animals. So I decided to take matters into my own hands and catch my own octopus in the most sustainable and traditional method there is by going to the rocky coastline and catching them in rock pools.

The tuille in my dish physically looks like coral and is a reminder that pollution affects every aspect of the ocean, coral being one of the most affected pollutants and it is also one of the most important creatures in maintaining the health of the ocean.

The ghost net itself is made from spiralized kohlrabi and on the dish it visually ‘traps’ other elements on the dish just as a ghost net would in the ocean.

Deep-fried sardine skeletons add texture and are a visual representation of death.

Other elements on the dish simply pay homage to local ingredients, such as buchu, naartjie, foraged wood sorrel, foraged crispy seaweed (probably the highlight of the development of the dish was discovering this ingredient and its possibilities) that emulates a plastic bag caught in the net, and local Franschhoek smoking chips used to smoke the kob.

Then the sensory element of my dish is created by dropping dry ice into hot seawater I collected to produce an eerie mist or ghost that covers the majority of the dish when poured over. This very important element speaks about the main issue of sustainability, education. As I mentioned earlier, most people don’t even know what a ghost net is which poses the question; what other unsustainable crimes are people committing that lay beneath the surface?

Chefs need to use their power to educate people and other chefs about important messages we can convey through our food.”