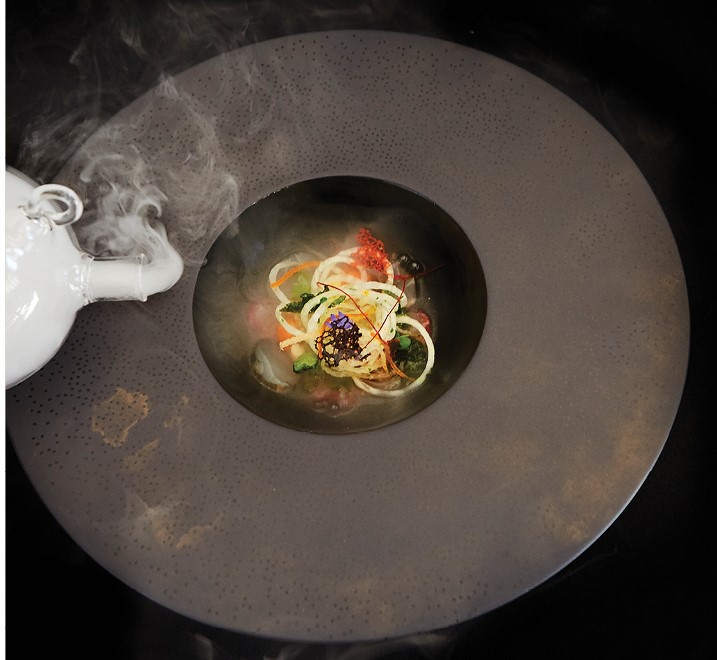 CULINARY TRAINING EXCELLENCE, AND NOTHING LESS

In the wake of the recent announcement of two ICA-trained chefs being listed on the S. Pellegrino World’s Best Restaurants list, on 30 October 2021 (read more on Kobus van der Merwe (No. 50) and Peter Tempelhoff (No. 92) here), ICA received the incredible news of 2019-graduate, Callan Austin, being named WINNER of the S. Pellegrino Young Chef Award for Social Responsibility for his culinary creation “The Ghost Net” in Milan, Italy!

Through this signature dish, Callan sent a strong message about the influence chefs have to convey important messages of social responsibility to the public by means of their culinary art, addressing the problems we as humanity are currently facing, such as the state of ocean pollution.

The fact that the ICA instils a steadfast philosophy of social responsibility and sustainability in all aspects of its training, is highlighted in Callan’s winning entry. Menu Compilation, a 1st and 2nd-year theory subject, consistently challenges students to question each and every single ingredient used in each and every component on a plate. Nothing is for nothing. Every element, every method, and every technique múst have a reason for its existence and presentation. Throughout their theoretical academic education, our students are taught to find a deep reason for using a certain ingredient. Assessment and examination questions are formatted to explore the “how” and “why” behind all components on a plate with reasons varying from decidedly scientific to intentionally esthetical to tremendously emotional.

Mentors also played a vital part in Callan’s journey to the international culinary stage and sustainability and responsibility formed an integral part of Callan’s career development. From early industry placements at top South African establishments during his studies to guidance and mentorship received from culinary greats during the competition, such as Michelin-starred chef, Massimo Bottura, winner of the title Best Restaurant in the World (No. 1) twice – in 2016 and again in 2018!

Chef Bottura believes young chefs and restauranteurs can be a force for positive change and this outlook resonates powerfully with the ICA’s training values. Callan clearly understands these values and leads by example.

Callan, however, is not the first ICA-trained student to shine on the international S. Pellegrino Young Chef Competition stage in Milan, Italy, during the competition Grande Finale. In 2015, former ICA student, Angelo Scirocco, was named winner of the Africa & Middle East region, showcasing his dish entitled “Milk is Thicker Than Water”. Participating in an international competition provided Angelo with invaluable exposure and experience that he can still draw on as he currently runs a very successful restaurant in Barcelona, Spain.

ICA-trained chefs continue to impact the industry in an inventive and progressive way – locally as well as abroad.

With yet another announcement of ICA-trained chefs making their mark on the global stage, the following question was raised to ICA Principal, Letitia Prinsloo: How is it possible that one of the smallest chef training institutions in the world could produce chefs of such talent and high caliber?

The answer is simple: “ICA trains world-class chefs for the right reasons. The school’s emphasis remains focussed on culinary training excellence and nothing less. We cultivate chefs who are at the forefront of culinary innovation, chefs who do not just blindly conform to the latest trends and fashions, but who can truly set the benchmarks for others to follow.” – Letitia Prinsloo, Institute of Culinary Arts Principal

APPLY NOW
WHEN THE PENNY DROPS