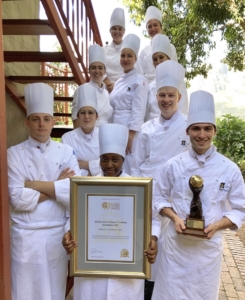 In a world where badges, medals, awards or points are easily purchased around every corner, true credibility is hard to come by.

The difference between true, and not, is one word – INTEGRITY.

For more than a decade, ICA founder and principal, Letitia Prinsloo, served on the judging panel of the world’s biggest and most prestigious culinary awards body of 1 080 independent experts:

Letitia was also a valued local awards judge for many, many years:

Both these awards bodies are revered for expert views on the restaurants and chefs they judge, as it is only through fair and well-educated judgement, that they can exist and succeed in their purpose. As is the case with the world’s biggest and most accomplished judging body, the same rings true on home ground, where judges must stay strongly principled to voice respected opinions and judgements.

What does it mean for restaurants to be listed in the South African Top 10? Or in the Top 50 or even Top 100 restaurants in the WORLD?

The S. Pellegrino Aqua Panna World’s 50 Best Restaurant Awards judges thousands of restaurants annually in 27 regions around the world. In Paris alone, an estimated 45 000 restaurants exist and almost 27 000 establishments call New York City their home. As a developing nation with a love for coming together over food, South Africa is home to about 85 000 restaurants. The exact total amount of restaurants worldwide is not known but is estimated at roughly 15 million. Being recognised at all in such a vast sea of names is rather a BIG deal. The ICA is therefore always incredibly proud of any former student to receive recognition amongst these respected judging organizations.

But one thing is certain – recognition does not happen overnight and respect and appreciation must be EARNED.

ICA Principal, Letitia Prinsloo, is known to address students upon graduation with an analogy that they have now only reached the ground level of their careers. ICA lays a strong and durable foundation because of how the ICA trains chef students in the fundamentals of Classic French Cuisine and the science behind cooking and pâtisserie. Students graduate and spread their wings, chefs must be mindful to take the stairs … one, by one, by one … and not be tempted to jump on an escalator to the top! Slowly building on their foundations, step by step will ensure a focused and thriving career. Escalators may run out of steam, they get stuck or, worst of all, one can fall right off.

Young chefs on the brink of a bright future may feel impatient to reach their goals, but entering the culinary arena after graduation is precisely the right time for executing slow and deliberate career moves that will stand the test of time.

To highlight a few recent achievements on the global culinary stage, ICA-trained chefs like Peter Tempelhoff, Kobus van der Merwe and Callan Austen’s accolades are testimony to this fact:

7 years from studying at the ICA to receiving the coveted Social Responsibility Award at the S. Pellegrino Young Chef Academy Competition in Milan, in 2021. 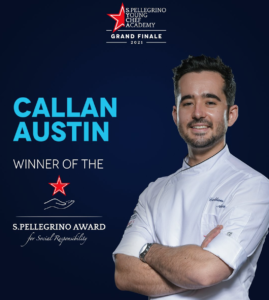 25 years from studying at the ICA to being listed on the S. Pellegrino Aqua Panna World’s Best list at No. 91.

14 years from studying at the ICA to be named Relaîs & Châteaux Grand Chef (an elite group of 520 chefs de cuisine on 5 continents, with Chef Tempelhoff currently the only acting chef in SA to hold the title). 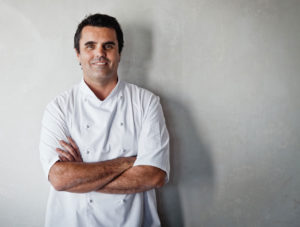 21 years from studying at the ICA to receive the titles of World’s Restaurant Awards 2019 Off-Map Destination ánd Best International Restaurant of the Year.

22 years from studying at the ICA to being listed on the S. Pellegrino Aqua Panna World’s Best list at No. 50, making it into the most elite and select group of 50 Best Restaurants – GLOBALLY – in 2021. 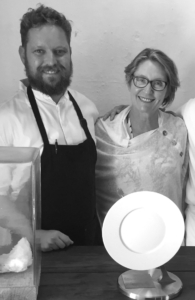 A delightful article in the 70th Celebratory Sarie KOS/FOOD currently on sale features Kobus’ restaurant and an interview with his Sous Chef. According to Rochelle Karolus, Kobus told the staff that since winning these incredible awards, they should be expecting many people to flock there just because they won those awards. But Kobus insisted that no one will be treated any differently than before. Culinary trophy hunters like bragging rights and might be taken aback by the beautiful simplicity of Wolfgat. But Kobus remains true to his identity, his passion, and his original vision. Together with his team (only 6 people in total), he keeps doing what he does best, and he will not change his presentation to please them, but stay true to what Wolfgat means to him. Fine dining at Wolfgat on the South African West Coast requires perfection.

Perfection is the constant aim in which ICA students are trained.

Perfection is what brought the awards to this humble fisherman’s cove restaurant.

Time and again, this strive for authenticity and integrity emerges as the ultimate benchmark for reaching the top. Not only did Chef Kobus van der Merwe make it clear to his team, some of the greatest chefs locally as well as internationally, have done the same:

Franck is humble though, and despite his achievements, numerous awards and an elevated status with a huge fan base and following, for him the pleasure revolved around the enjoyment of cooking and having happy patrons.

Franck left the glitzy stage of awards and accolades and made the move to Noordhoek where he established The Foodbarn, motivated to spend more time with his family and introduce better food to a broader audience using his experience and food-savvy ways.

In 1994, at the age of 32, Marco Pierre White became the first British chef to be awarded 3 Michelin stars and the youngest chef to achieve 3 stars to that point.  A commendable mentor to other young trainee chefs, Marco also served as ICA industry training partner, mentoring some of SA’s very best chefs, including ICA graduate, Peter Tempelhoff.

Although he worked for 17 years to pursue his ambition, he ultimately found that, in spite of his accomplishments, recognition and fame, his career did not provide him with adequate returns in his personal life. In 1999, he retired and returned his Michelin stars. He continued to build his career in a different way, staying true to his own identity and culinary style.

Almost 30 years ago, Letitia Prinsloo founded the Institute of Culinary Arts as a chef school with the aim of training chefs in South Africa that can compete in the global culinary arena.

Located in the beautiful Banhoek Valley just outside of Stellenbosch, the ICA was established to uphold a simple philosophy of training excellence and superior standards right from the start. 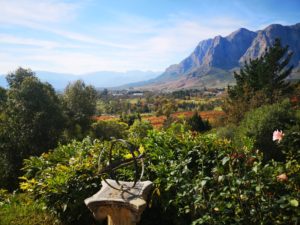 View over the Banhoek Valley from the ICA Campus

In the years that followed, the school continued to expand and eventually needed to be relocated to a larger location at Spier Wine Estate. Enrolments grew to over a hundred students annually, even including hostel accommodation on site.

But Letitia realized that this picture no longer reflected her dream of an intimate, focused, and excellent culinary learning environment. In 2010 the decision was made to drastically scale down again and move the school back to Banhoek where there are wide open spaces with breathtakingly inspiring views over the surrounding mountains, vineyards, and orchards. Since then, the school once again operates on an average lecturer-to-student ratio of 1:6, enrolling a small number of carefully selected students yearly, thus ensuring in-depth personalized training and skills development.

ICA courses are tough. Discipline is highly valued and excellence is expected in all aspects of the culinary arts. There are no shortcuts – not even when the challenges of a worldwide pandemic, lockdown, and numerous restrictions complicated normal functioning. Students are consistently trained in all the fundamentals of classical cuisine. The foundation on which any culinary career must be built.

RECOGNITION OF THE ICA

Many accolades and awards have been bestowed upon the ICA for its unwavering commitment to training excellence. These accolades are greatly valued because of the integrity and quality of the organizations that recognized the ICA’s work over 3 decades. 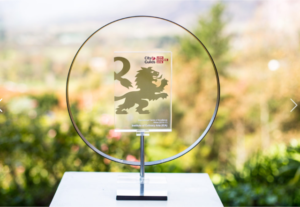 2017 MEDAL FOR EXCELLENCE AWARD: TUTOR OF THE YEAR 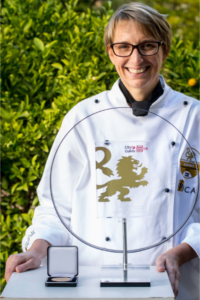 It has been said that the one criteria that always stand out with regards to a Lifetime Achiever, is not only the long-lasting impact the individual has had, but the circumference of this impact and the possible ripple effect their impact will have on more individuals even after the person has retired. EatOut head judge, Abigail Donnelly, noted that “Letitia has taught and mentored generations of our finest South African chefs. She sets incredibly high standards, and her life-long dedication and positive commitment to improving cooking standards make her a very deserving winner of this award.”

Today, ICA alumni pass on Letitia’s vision in their own kitchens, mentoring and shaping trainee chefs and young professionals. This ripple effect is how an individual vision changes into a long-lasting impact on the quality of chefs in the culinary industry for years beyond. 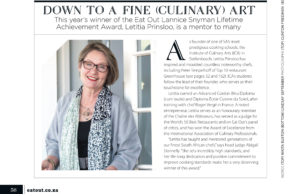 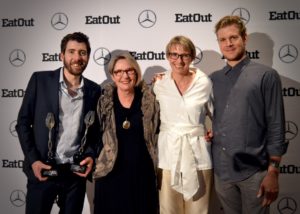 Most recently, the ICA received yet another title of being the best in its field. 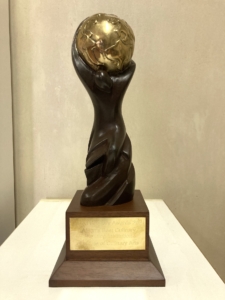 “The ICA strives to uphold a simple philosophy of excellence in all aspects of the culinary arts. Our integrity lies in honoring this philosophy as it was established since the school was founded, and as it remains the benchmark in how we train chef students today.” – Letitia Prinsloo, ICA Founder & Principal

Our philosophy will not change and our aim will not be distorted. ICA will continue to train chefs of the highest calibre, leading the industry.

Being recognized by external bodies and awards organizations is only a testimony to upholding this philosophy consistently after almost 3 decades of chef training at the ICA.

Applications for 2023 are now open.